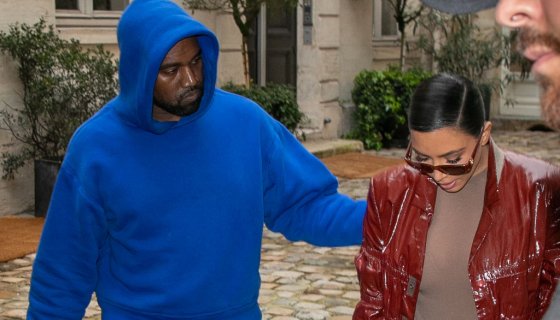 Kanye West reportedly let the Kardashians and friends down with his latest sideshow.

TMZ is reporting that following called a campaign rally in North Charleston on Sunday (Jul.20), his wife, her family, and close friends are “seriously concerned and upset.” After he put his lack of historical knowledge on full display by falsely claiming that wasn’t an abolitionist/freedom fighter but instead a slave trader, West went on a disgusting rant about abortion and shared personal information.

According to the celebrity gossip site, the Kardashians were not pleased that Kanye spoke about Kim’s first pregnancy and him wanting to abort his first child, .

Suffice it to say … we’re told the family is upset that Kanye talked about Kim’s first pregnancy and how they discussed abortion, something he says he wanted. Then he blurted out that Kim might divorce him for saying that, but even if she does, he’d thank her for having North.

That’s not all West revealed either. During the bizarre event, the rapper jokingly detailed how he thought Kim frantically trying to reach him to tell her she was pregnant scared him cause he believed he gave her AIDS.

Before Kanye talks about possibly aborting North, he jokes about maybe giving Kim AIDS. Then, he says they contemplated abortion for 3 months. @KimKardashian did you know or give Kanye permission to share this private info with the world? https://t.co/TDQQTsqFWb pic.twitter.com/67ybH7JGv3

Since the event, the Chicago native has been trending with many hoping he gets the help he deserves while at the same time urging people not to take this man’s run for the White House seriously. People were also not pleased with his blatant disrespect of Harriet Tubman as well.

Harriet Tubman doesn't give a damn about anybody's koonfuturist opinion.

Regardless this man doesn’t belong on a ballot. He needs to be on a couch, having an in-depth conversation with a professional psychiatrist. Instead of pushing #2020Vision, maybe #GetKanyeHelp should be trending, just saying. Head music: 7 of the best Bluetooth headphones for $400 or under