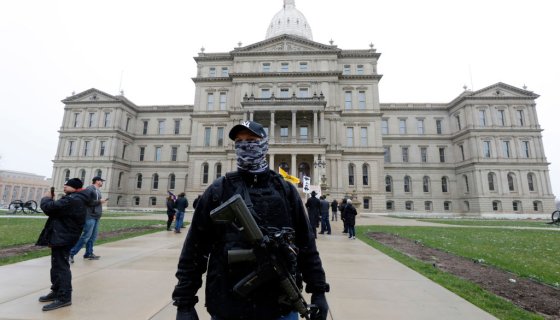 A Black lawmaker who appeared fearful of the protests and stances of residents opposed to the state-mandated shutdowns was offered a special security detail this week. A group of armed Black men flanked Rep. Sarah Anthony as she entered the state capitol building due to her concerns.

Local outlet City Pulse reports that in the wake of a large gathering last weeks of opponents to Gov. Gretchen Whitmer’s lockdown orders, with some protestors donning Confederate flag wear, Rep. Anthony expressed concerns that the state has done little to protect legislators from entering their workspace free of harm.

“We were all just appalled by the lack of support and lack of security that I had, that other legislators had, and the fact that a lot of the demonstrators last week were adorning many racist, anti-Semitic signage,” Anthony said. “I think it just triggered a lot of folks, especially African Americans.”

Michael Lynn Jr., a Lansing firefighter and activist that helped organize Anthony’s detail this past Wednesday, said that after seeing Anthony post a Facebook video as the armed protestors demanded a reopening of Michigan’s economy, he felt it was time to exercise his Second Amendment rights as a Black man just as his white counterparts were able to do.

“I could hear the fear in her voice during that protest,” Lynn said.”“It was the visual of her being that scared to go to work. It meant we had to do something. We came out here today to make sure we could provide some protection, even if it’s only just to make her feel better.”