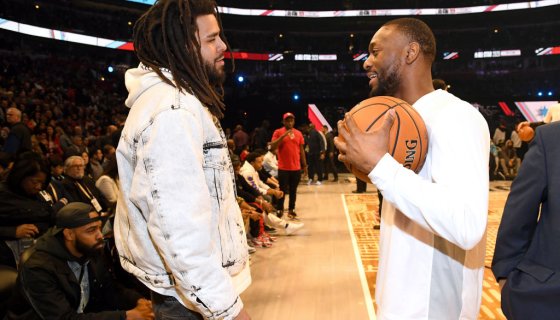 It appears that isn’t as done with the sport of basketball as he previously claimed, at least according to .

During an interview with TMZ Sports, the revealed that still has aspirations of playing in the NBA and has reportedly been in training to build up his skill and stamina to play at the professional level, before adding that he had a long conversation with the Dreamville head about moving into the league.

While Master P, who previously tried out for the NBA in 1998 and was signed to two teams including the then Charlotte Hornets and Toronto Raptors, was sharing his knowledge of the process, he notes that J. Cole shouldn’t rely on his popularity in Hip-Hop adding that his music success is what will make the “False Prophets” rapper’s transition in the game harder.

Overall the former rapper turned hooper states that he “believes” in J.Cole’s ability to crossover noting that his size and drive make him a great candidate but overall it’s his skills that will make the ultimate determining factor.

“I believe in him and I believe that he’s a youngster that has a lot of desire,” Master P said. “Either you’re gonna be good enough to play or you’re gonna get exposed.”

, last month in an op-ed written by the “Snow on the Bluff” rapper, Cole revealed that he was retiring his hoop dreams, before detailing his journey to making the difficult decision. The intimate essay, which seemingly served as a letter to himself, described his love for basketball and coming to grips with the reality that although it was once a career choice, obtaining that dream professionally “isn’t going to happen, adding that during that time that he was torn between his love of hooping and rap, that he had been struggling to find the motivation to write before ultimately realizing that if he still wanted to rap, he had to put his hoop dreams behind him.

“Four years have passed,” J Cole wrote. “In that time I’ve been blessed with two sons, learned the delicate art of balance between parenthood and career, had the pleasure of working with a ton of talented artists as a featured rapper, spent 10 magical days recording a Dreamville album in Atlanta, and put a lot of time and energy into sharpening my sword and growing as an artist.”

Master P and J. Cole recently linked up for a which saw Cole hard at work on the basketball court. P, who serves as the voiceover, hints to the audience that Cole is about to do something big that could pertain to the NBA.

“I mean, what’s the odds? I know you got more sense in that, youngblood,” he said in the commercial. “Hold up, I think the homie really tryin’ to do it.”

Check out the interview with Master P below.