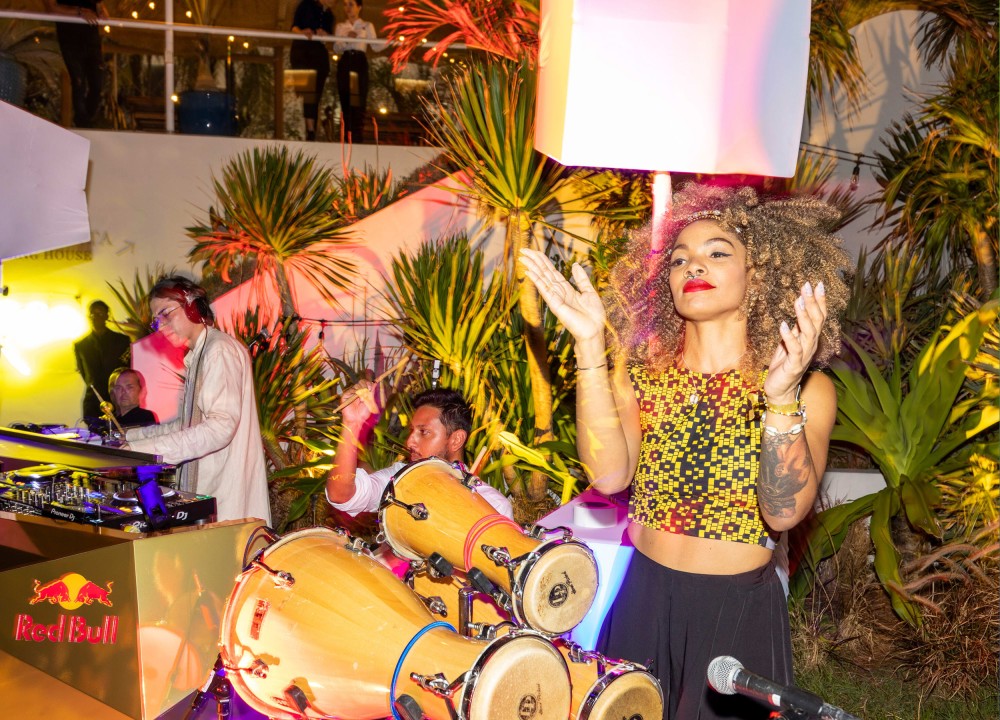 One of the most rewarding things about being a journalist is being able to experience multiple lives through your subject’s stories. You get to listen to your interviewee’s passionate anecdotes that inspire you. And if you get lucky, you get a first-hand look into something happening just as you’re reporting about it.

This is what happened to me at Red Bull Guest House’s Tigre Sound Presents: Raíces event. I got to interview artists about their roots, then something bigger connected. I started to notice that these international artists – all with incredibly different backgrounds – unknowingly resonated with one another. It was almost as if they heard each other’s responses. They all seemed to end up talking about one thing: finding connections through foreign cultures.

A significant part of the Raíces event this month (May 6) was all about creating an inviting environment that indulged in Latine and global roots. Not only that, though, it showcased a new movement in the making – a sort of international spectrum of music and art where all types of global sounds and heritages were not only welcomed but also inspired connection with one another.

It helped me further realize that even though we’re all from different cultures, we all look for community in the same way: through arts and culture. In this case, it all came to me during the massive inaugural 2022 Miami Grand Prix that presented this opportunity for Red Bull Guest House to host all types of cultures in one exciting weekend.

To get a sense of this comradery of international artists showcasing their roots in their art while welcoming others to interact with it at the same time, we talked to five of the artists who participated in the Red Bull Guest House’s Tigre Sound Presents: Raíces event this month. Here’s what they had to say.

On why it’s important to showcase his roots: “I think you’re challenged in the U.S. [because] everything is changing so much, and you have so many cultures shining in that it’s really about preserving your roots. I think that the instinct of showcasing my culture of Mexico and Colombia in the U.S. is what influences my mission the most.

“My dad is a psychiatrist, and I always talk to him about mental health issues. Two weeks ago, he was showing me some data on the state of mental health in the U.S., the U.K., and Latin America, and it was interesting to see how despite Latin America [being] a country or region that’s not so developed, the indicators of mental health are way better than in the U.S. and U.K. and places like Germany, Italy, etc. I asked him why do you think it was that? And he was talking about the main reason that happens is that right now, we have so many interactions because of social media but so little connections. So Latin music and showcasing Latin music generates that connection that’s missing for so many people around the world.”

“I feel that we export so much culture around the world from J Balvin, Maluma, all the reggaeton from Karol G. But also others like Bomba Estéreo, etc. So I think it’s that feeling of exporting music and being able to connect with other parts of the world –  that’s what gives you that feeling of having to showcase your music, your art, and your culture all around the globe.”

On the instruments she uses in her music to express her roots: “I am from Cuba. My roots are African, Spanish, and some from China. I am talking about my family tree. For that reason, I think percussion has a big part of everything that has to do with my life. Also, the drums, specifically the three-drum family. They are part of one family.”

On why it’s important to express Latin culture in her music: “It’s where I come from, it’s my roots, it’s what’s inside me. But it doesn’t mean that I only represent or do Latin music. Because for me, the most exciting and the most wonderful thing is to explore. There is so much diversity. I have this Latin root; nobody takes it away from me because it is something that was born with me.”

On human connection through music: “Energy and connection are very important — musician to musician, musician to audience, and audience to artist. It can be the most disastrous show in the world, but if the artist manages to connect with people, I think it touches their hearts. People would fall in love even if the artist doesn’t have all of the right conditions. So energy, love, connection.”

On choosing the artists: “The scope that I was really focused on was heritage. That was kind of what I was asked to put together. And I think there are a lot of different sublayers within that. With the Miami Grand Prix happening here in Miami, you want to give homage to the Miami sound, which comes from so many Latin cultures, mainly predominantly Caribbean and Cuban — that’s now expanded into so many other different sub-elements and genres of how people are influenced.”

“I wanted to be sure that [this influence] was reflected in all the different intercontinental rhythms. Everybody is sampling and working off of each other’s sound. And to give proper homage to that is to be sure that we’re positioning people who are pushing the boundary and doing really unique live sets… The main thing is I always want to feel that what I’m programming is like building music where people really can feel that you might not know about it, but you can feel a sense of connection to it, and I think that’s what creates a resonance.”

On finding new roots by leaving his country: “I came eight years ago to live in Miami from Argentina. I played for more than 15 years as a DJ and a musician [in Argentina]. I’ve learned many things, but leaving my home and culture made me appreciate it more, especially because  I found a new home here. And I found many people that were in the same situation as me. They were all losing their roots by gaining new ones. And so we’re all starting to grow in this melting pot that is Miami, especially because a lot of people here help you, and we’re in the same situation as you. We’re all foreigners here, and here we can find cultures from all over the world, especially in South America, which is beautiful.”

On the centerpieces of the event: “I wanted to give an ode to Latin women and iconic Latin women like Celia Cruz – I have a whole list that I got inspired from – with the extravagant makeup on the woman and all the headpieces that have, like all the palm trees. Then [came] the idea that [the center pieces] would become a shrine for them in the center of the table. That’s why there are all the offerings of fruits, plants, and flowers. For the selection of the fruits and flowers, I selected things that come from my culture, which is Caribbean – the Colombian area Barranquilla is where I’m from – I also had a lot of influence from Carnival.”

On expressing herself through her art: “I feel like it’s a constant exploration in general, [from] how I identify to where I belong. But I think I am influenced by so many cultures in general. But of course, at the end, what comes out of me, I feel like it can really identify with more Latinity tropicalismo psychedelico. There is a certain spirituality to it as well. That belongs to all the offerings in general, like culture. But the offering culture also comes from Asia, Africa, and the Caribbean. It’s not only an inspiration, but it’s also my personal spiritual path to work with shrines and offers. I identify as a woman, I identify as a human, I identify as a Latin, but I also identify myself as a citizen of the world.” 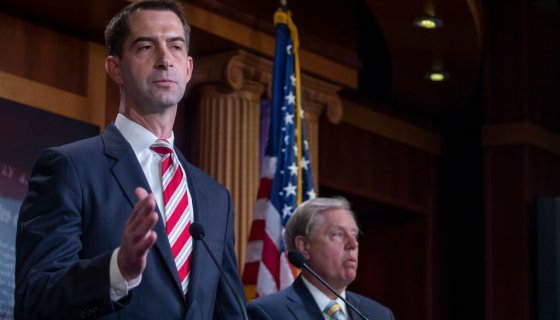 Your Racism Is Showing: Sen. Tom Cotton Describes Slavery As A “Necessary Evil”