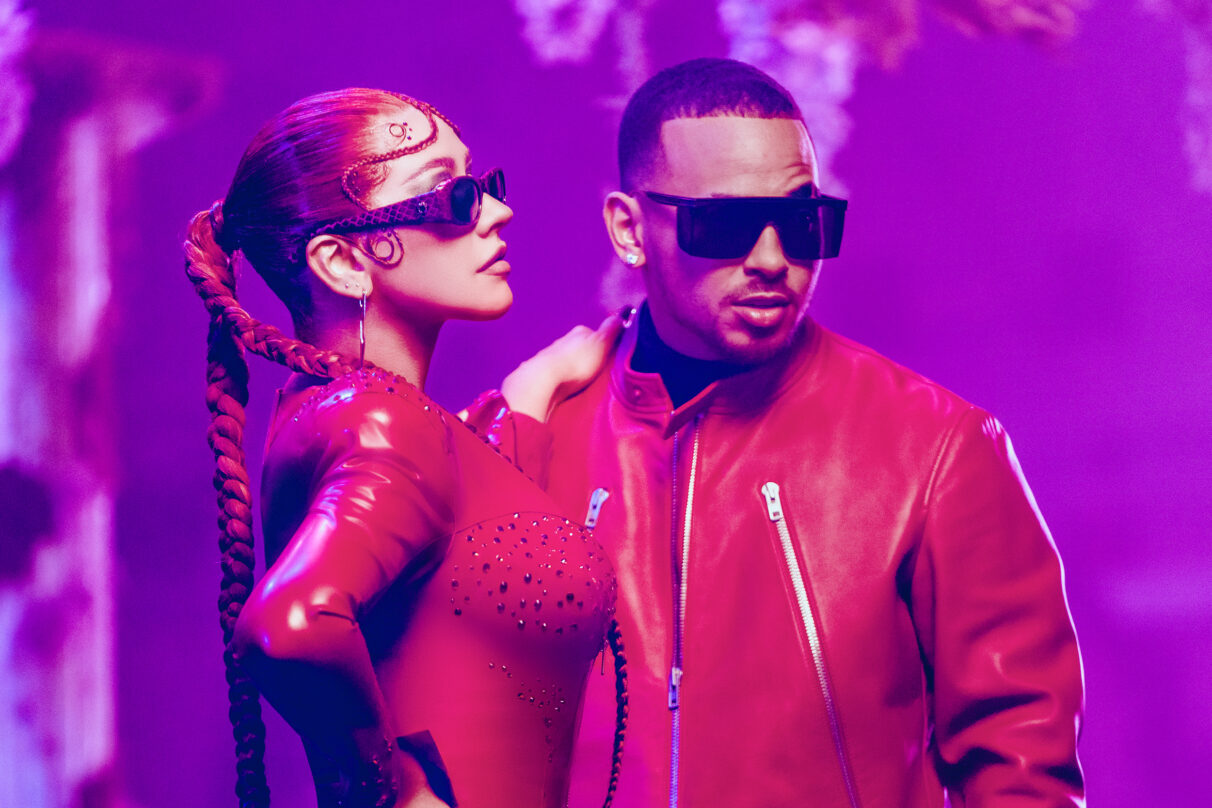 Santo, sálvame que tú me tienes perreando, indeed! After a surprise social media announcement last week, which teased her collab with Ozuna, Christina Aguilera has embodied the pop-based vein of reggaeton with the absolute banger, “Santo.” The single is Xtina’s latest off of her Spanish-language La Fuerza EP.

Directed by Nuna Gomez and shot in Las Vegas, the music video for “Santo” is sensual and intriguing. The storyline of the video picks up from where Aguilera’s “Somos Nada” video left off, with her lover dying a poisoned, Gatsby-esque death in the pool of their mansion. “Santo” sees Aguilera, clad in an array of black and red leather ensembles, entering a movie theater, which is in actuality, the entrance to the underworld. We see interpolating shots of Aguilera and Ozuna singing together, and Aguilera finding her undead lover in a “Garden of Eden” inspired set, with hazy yellow and purple lights separating the two vibes.

One eagle-eyes fan even caught that Aguilera’s red dress was a reference to the poison that killed her lover in the “Somos Nada” video.

Living for @xtina portraying the poison that killed the guy in Somos Nada ❤️‍???

SANTO SÁLVAME (or everyone around because I‘m gonna blast this on repeat 24/7!!!!) #santo #LaFuerza pic.twitter.com/zU5OKPdkww

Xtina fans, as expected, absolutely lost it over being FED a full course meal with this video.

She gave us BUDGET. She gave us VISUALS. VOCALS. LOOKS. Even his part was amazing ?? @xtina #Santo pic.twitter.com/wijSppOjTL

Many fans were VERY supportive of the new aesthetic of this new era.

Gagged. Xtina ate. I’m deceased. Santo will be on replay forever in this house. pic.twitter.com/T7lXnhwKc9

Does anyone else remember Aguiler’s ICONIC opening performance of “Dirrty” at the 2003 EMA’s?!

Honestly, after watching that video, I think we ALL can relate to this conversion.

My new religion is Aguilerianism!!! #Santo is a WHOLE bop! pic.twitter.com/dp1v9GBDEQ

In the meantime, much like this Twitter user, I’ll be trying to recover from THAT garden scene.

Watch the music video for “Santo” below.