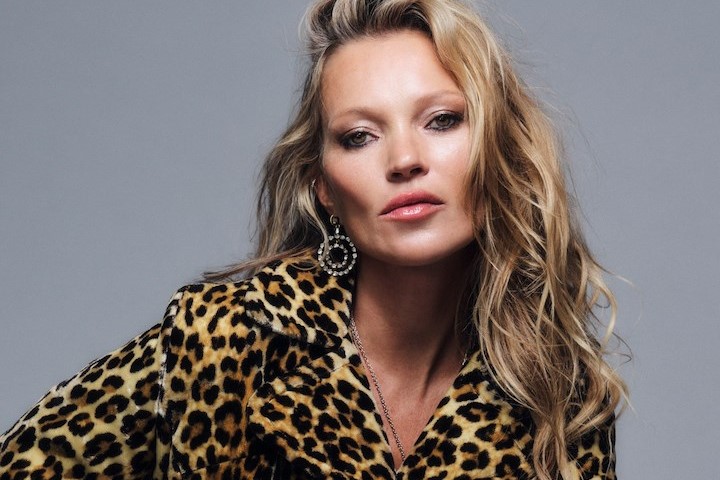 In an uber rare interview, the legendary supermodel talks fave pieces from her fashion archive, what’s chic and what’s not, and channelling Andy Warhol in her new role as creative director of Diet Coke

Attention girls, gays, and theys: you can sleep easy in the knowledge that Kate Moss is every bit as fab, chic, and filthy as you ever dreamt she could be. Like a foul-mouthed Marilyn Monroe, only someone with a demeanour like this could have a face like that – any less camp and outrageous and you’d be annoyed she’d been given the kind of cheekbones most of us can only dream about.

Though her Croydon accent and dirty laugh serve to make her feel just like one of the girls, it’s hard to actually comprehend her legend. When we sit down in a glass building by the River Thames on a boiling hot day, it’s difficult to comprehend that fact that, there she is – not only emblazoned on the side of a Diet Coke can, but also etched in my memory from 1,000 fashion moments I’ve loved. The kind of moments that made me (and millions of homosexuals) who they are today. And she’s now opposite me, on a couch, in a leopard print top, smelling to high heaven of something expensive and vanilla-y.

Her image is totally ubiquitous, and totally responsible for countless style revolutions through the 90s, 00s, and 2010s, but somehow, the most famous face in fashion manages to remain an enigma. “I never think about it like that!” she tells me. “I like to be able to walk down the street with my dogs – I don’t do sunglasses and hat, or, like, security guard. I’m just normal, and that’s my job.” Even this interview is one of just a handful she’s given across the course of her (almost) 40 year career, preferring to let her campaigns and catwalk appearances do the talking instead.

Kate is one of the few people I can think of that actually deserves the deeply overused words ‘iconic’, and ‘icon’. What does this mean? It means, I might argue, that the moment someone says an icon’s name, some very sharp images are conjured in your head, and these images can’t be assigned to anyone else. There’s only one Kate Moss. And there really is only one Diet Coke. Another icon, particularly if you are an unhinged fashion girlie, a gay boy with a bad hangover, or a they/them in a hurry.

It’s because of this that we’re here, sitting opposite each other in this scorching hot glass building, in fact. The supermodel has just been appointed as the creative director of Diet Coke on its 40th anniversary, and has just debuted a new selection of cans featuring designs inspired by her infinite archive. And so, she’s going to fill me in on the journey, her fave fashions, and whether she thinks festival style is chic or not in 2022. She cackles, she squeezes my arm, and tells me a series of endlessly fabulous things that must remain totally off record, before, at the very end, she grabs a red pen and scrawls her signature on my leg with it. Here’s our conversation.

Kate, first of all tell me: Diet Coke. Why do all the girls drink Diet Coke?

Kate Moss: Because with ice and a slice, it’s the best drink!

Kate Moss: Yes, with Topshop. But here [with Diet Coke] I had all the ideas: who’s going to do the hair and make-up? What the can’s going to look like. What the fabrics are, because it had to have something to do with fashion. So we were like, well, things that I’ve always worn: leopard, camo – always – denim, black lace. Always. And then we did the special, which is the naked. And people can get that as a lucky dip in their multipack!

“I’ve always been into Warhol and The Factory. I pictured [the can] looking cool in a factory-like atmosphere. The drawing is much more Warhol. I got into the Pop Art zone” – Kate Moss

Tell me about the illustration…

Kate Moss: A friend of mine, Tim Rockins, made a scarf for my birthday. And he drew my face and it had a top hat on it. And when [Diet Coke] was saying it’s got to have you on it somehow, I thought an illustration was so much cooler than a photograph.

Not an iconic photograph of you?

Kate Moss: I just watched the Andy Warhol Diaries about 50 times while I was in these hyperbaric chambers, and I would totally zone out to his [Warhol’s] voice. I’ve always been into Warhol and The Factory. I pictured [the can] looking cool in a factory-like atmosphere. The drawing is much more Warhol. I got into the pop art zone.

Everyone was as fascinated by Andy the person as they were by his work, and this feels similar. It all feels very ‘you’.

Kate Moss: Well, they’re all my clothes. That leopard jacket was June Carter Cash’s that I got in an auction when they sold a lot of their stuff, when they both died. The lace was for one of my birthday parties. I had a white one from Kate Halfpenny, who does wedding dresses, and I was like ‘Oh my god, could you make one in black, green, yellow, red, and white?’ I had five for my birthday, so all through the night I changed colour. It was a good dress, and a good party.

Do you think you’re relaxed or bossy as a creative director? Are you like Miranda Priestly?

Kate Moss: I can be quite bossy because I know what I want. But I’m not evil. I’ve got boundaries. I’ve got my team. I got to choose the team. You know Katy England, who’s one of my oldest friends. She said: ‘How am I going to get all these looks together?’ And I said: ‘Just come to my house’, because everything I have had come out of storage and was in my barn. I’m photographing everything and numbering everything. And everything is a memory. I can’t even go in there. It’s too much. It’s too emotional. It’s like I remember wearing everything, every dress. She pulled it together in half a day.

Wow. That archive must be like the most extensive look at contemporary fashion history there is.

Kate Moss: Things come back and I’m like ‘Wow I haven’t seen that in 20 years’. I haven’t even gotten through the shoes and accessories.

What’s your favourite thing? In the whole Kate Moss archive?

Kate Moss: The John Galliano Union Jack jacket. And then what else? I mean, there’s so many things, like little Ghost numbers and little Margiela numbers, and all these things. Helmut Lang that I used to get as payment for doing the show. When I was 17, 18.

There’s nobody like Kate Moss, and there’s nothing like Diet Coke. How does it feel to be sitting here, looking at a Diet Coke can of all things, and be like: that’s my face?

Kate Moss: I have to cut off emotionally about things like that. So when people go ‘Oh, you’re really famous’. I go, ‘Oh God’.

“The John Galliano Union Jack jacket. And then what else? I mean, there’s so many things, like little Ghost numbers and little Margiela numbers, and all these things. Helmut Lang that I used to get as payment for doing the show. When I was 17, 18” – Kate Moss, on her favourite garments from her fashion archive

Do you like being less visible? You’re not really on social media, and you never give interviews. Chic that we are here!

Okay, but how does it feel to be the most famous face in the world?

Kate Moss: I never think about it like that!

Kate Moss: Because then I would be all like that [sunglasses and hat]. I like to think I’m just a normal person, and [everything else] is just my job. When I walk down the street I’m just normal, [people] treat me normally. I’ve been around a lot of people [who try to disguise themselves] and the more they do it, the more attention they get.

It’s much more chic to be like you. Offline, free! Speaking of chic, let’s play my favourite game. Chic… or not chic?

Kate Moss: Oh, this is my kind of game.

Kate Moss: Hmmm. No hang on. No fedora, not really.

What hat would you wear today?

Kate Moss: I’m a bit over hats. But oh! I did buy a balaclava.

Kate Moss: Amazing! A striped balaclava from Marc Jacobs the other day. Gorj!

Kate Moss: Gorj! For me and Lila!

Festival Style… Which you arguably were the creator of! 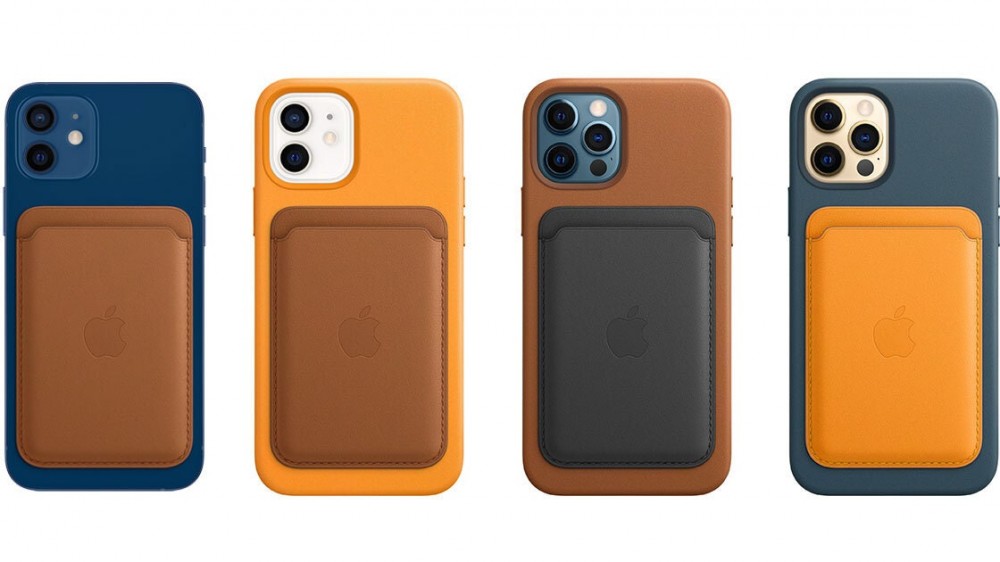 The New iPhone Case Is a Fashion Minimalist’s Dream 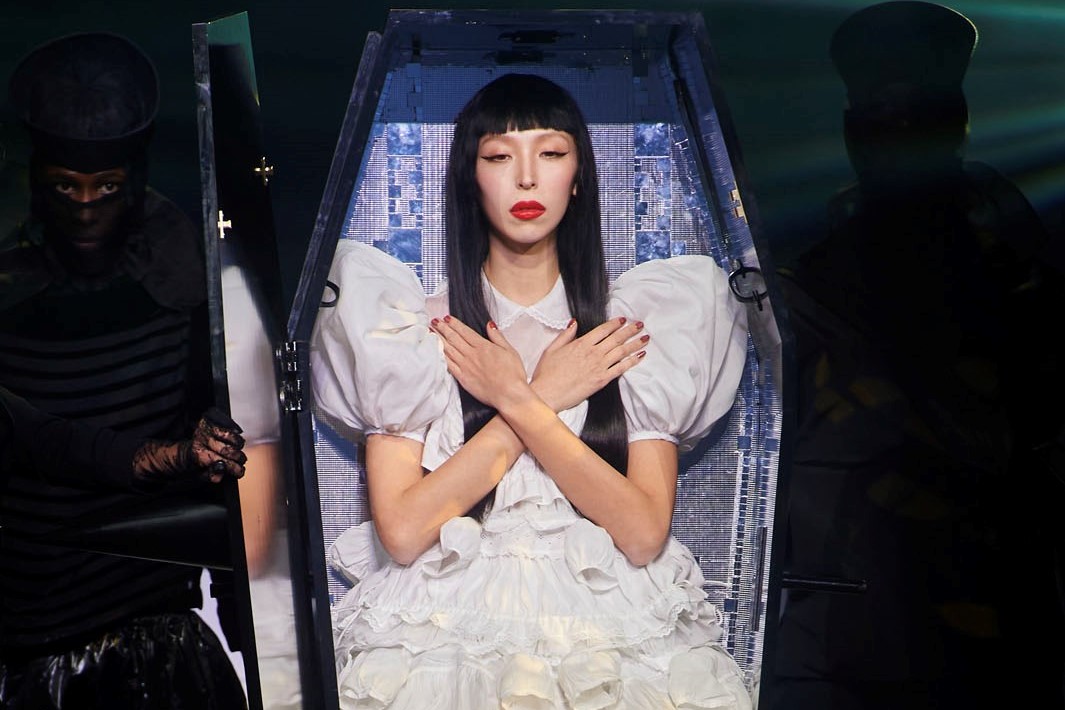 How to dress for your own death 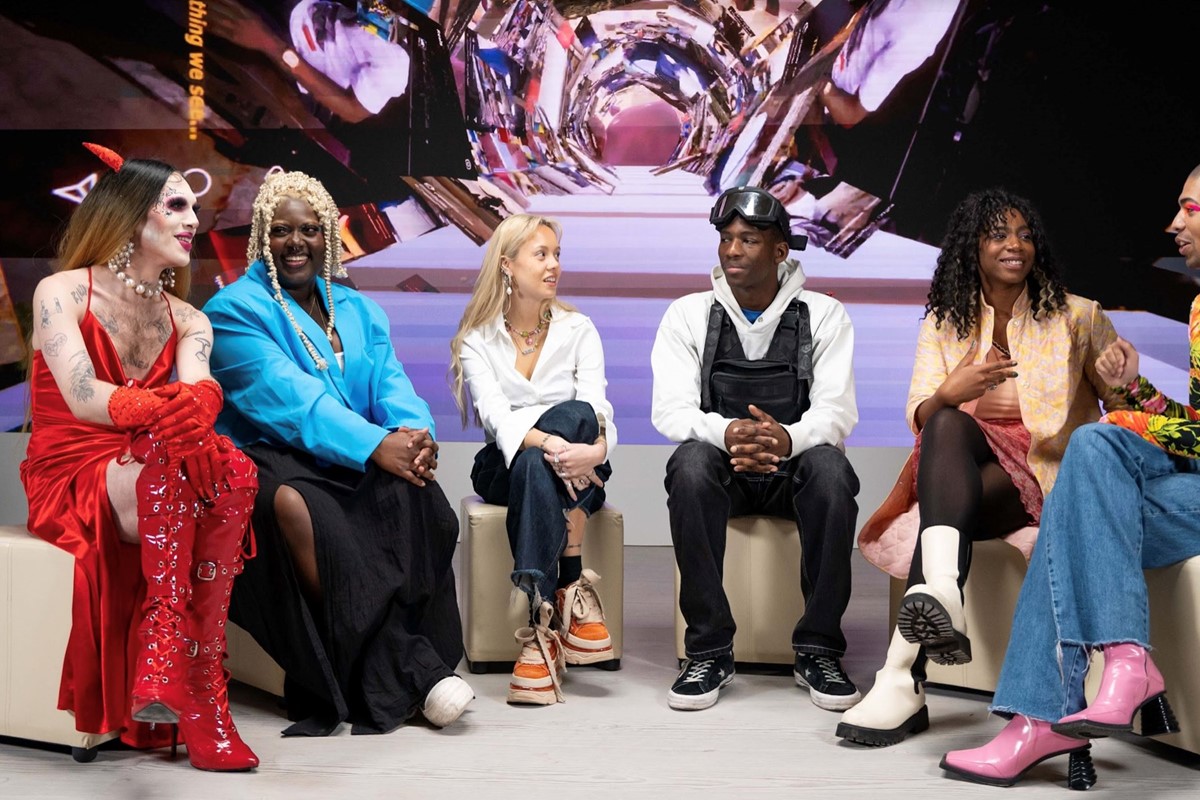