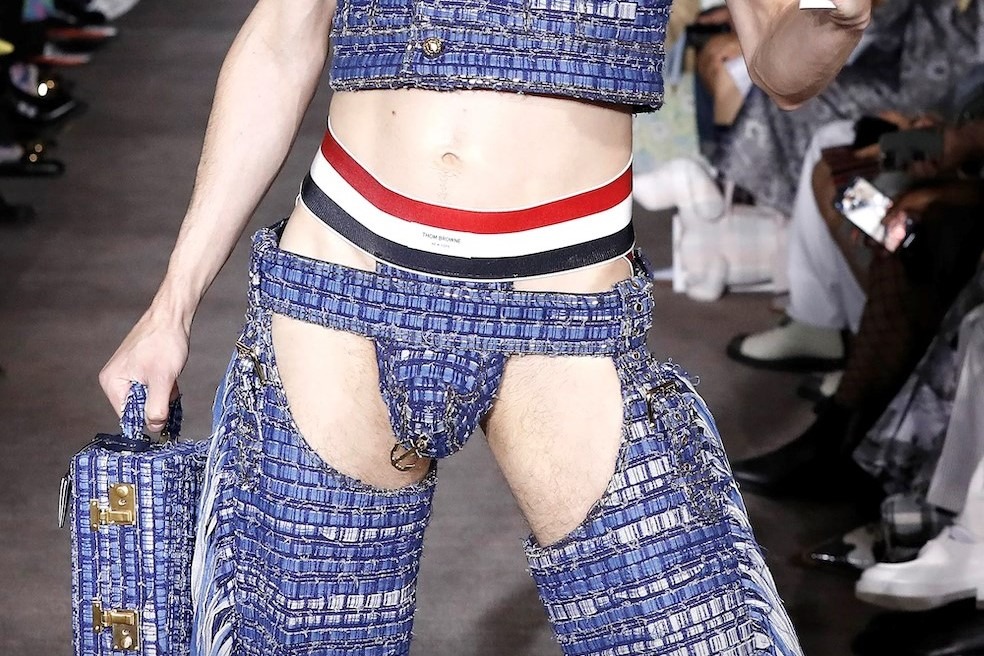 Bums out for the boys! The high fashion jockstrap rears onto the runway

With JW Anderson, VTMNTS, and Thom Browne offering alternatives, gays must unleash themselves from the shackles of aussieBum and Andrew Christian

A turgid penis appeared on Thom Browne’s most recent runway. Twitching skywards from a pair of tweed chaps as a model line-danced to all the twangs and glitches of Madonna’s Don’t Tell Me, a Prince Albert flicked in the face of Paris’ front row. Somehow, though, it wasn’t the hooked appendage that captured the imaginations of the audience, but the Americana jockstrap that exposed the wearer’s naked arse like a big ole baboon. A moment seemingly cooked-up exclusively for @fashionfaguette, it was bookended by the arrival of jockstraps at both JW Anderson and VTMNTS, which were printed with buxom Tom of Finland bodies, or otherwise teased from beneath low-slung leather waders.

Technically, brands have been producing jockstraps for a while. Versace, Rick Owens, Gucci, and Ludovic de Saint Sernin have all offered some kind of take on the style, but this season, it felt like designers had brought their derrieres together in communal offering. First invented in the late 19th century by a Canadian sportswear manufacturer, the jockstraps’ entrance into queer culture came at the hands of magazines like Physique Pictorial, which captured the latent homoeroticism of the sportsfield with portraits of greased-up athletes built like a shit-tonne brickhouse. With the front pouch accentuating the crotch and the rear left fully exposed, decades-later bottoms are reappropriating the jockstrap’s functionality for ease of anal – although I’m not sure how sexual you can actually get with the words aussieBum, Andrew Christian, and Box emblazoned across your waist.

That the jockstrap should emerge onto mainstream runways shouldn’t come as a surprise. The gentrification of gay sex has been years in the making, with the internet cornering popstars into posing with poppers and squeezable douches, as the bottom becomes an increasingly visible online identity. The same thing happened with sex harnesses in 2018, which transformed red carpets into spangled dark rooms. Elsewhere at fashion week this season, it felt as though there was a real focus on underwear as an expression of queerness, be it at Loewe, where boys walked trouserless, or Louis Gabriel Nouchi, where almost every model wore scooped-out budgie smugglers. But this also comes at a time when norms surrounding taste, sex, and identity are being contested, the trend dovetailing with the rise of anti-LGBTQ+ legislation like Florida’s Don’t Say Gay Bill: a controversial piece of legislation that restricts schools from teaching about sexual orientation or gender identity.

Below, we walk through three reasons as to why the jockstrap might just be having its high fashion renaissance.

THE CRACK IS BACK

Be it Louis Gabriel Nouchi, Thom Browne, or Mowalola, plenty of designers showed their rump this season. Suggestive cut-outs, chaps, jockstraps, and an overall economical use of fabric left models feeling the wind beneath their wings – which, in the sweltering heat of a summer show venue was a welcome invitation, I’m sure. Elsewhere, there were slivers of exposed underwear at Craig Green, Y/Project, Givenchy, Dolce and Gabbana, and Moschino, which riffed on another gay trope: the leather daddy, in all his peaked Muir caps and thick-soled military boots. Though the broad smile of a backside was not always visible, it was certainly alluded to with doubled-up waistbands and print call-outs across the SS23 shows. The whole thing was an evolution, perhaps, of the 00s g-string, a symbol of bad taste which has been reclaimed by almost every major designer hoping to cash-in on Y2K nostalgia. Only, where this tacky-fab déshabillé was once the domain of womenswear, designers are now offering a solution to the kinds of men who are less fluid in their gender presentation.

Swollen nipples, bountiful pecs, and weighty, jock-strapped bulges make up the distinct hallmarks of Touko Laaksonen, otherwise known as Tom of Finland, whose buffed-up characters have proliferated CDLP, Diesel, and JW Anderson collections over the past few years. Between those collaborations, all the references to gay saunas at Magliano and Louis Gabriel Nouchi, and the bushy-tailed fashion editorials of the spring summer season, the 70s pornstar look appears to be making a comeback. Central to all of that imagery is the jockstrap, which is perhaps sexiest at its most retro, long before Marco Marco got his hands on a pair. With male models younger and slender than ever, it’s a much-needed moveaway from the dour Twink as a cultural hero – sorry Timothée.

THE BOTTOMS ARE ON TOP

gays turning any innocent meme into something about bottoming or their asshole
pic.twitter.com/3KLLWleirK

Online, bottoming has become a meme unto itself, with thousands of people bemoaning the hardships of “bottom culture” with self-deprecating gags. While the jockstrap feeds into a tradition of queer men borrowing and reappropriating items from conventional masculinity, the prodigious opening of the bottom seems to have shifted those signifiers in the gayest possible way. I am loath to mention the Chromatica or Nicki Minaj jockstrap, but, at this point, I feel it’s probably necessary. And all this chat has infiltrated culture at large, with straight women identifying as “a bottom” as if it were some kind of star sign. Even Charli XCX has a branded douche, while Bree Runway has taken to spanking jock-strapped men in her music videos. The runways are always referential in nature, and so with the mainstreaming of gay sex comes the nozzle of fashion’s suck-all hoover, drawing in all the codes and costume of sodomy like a big, sloppy bottom. 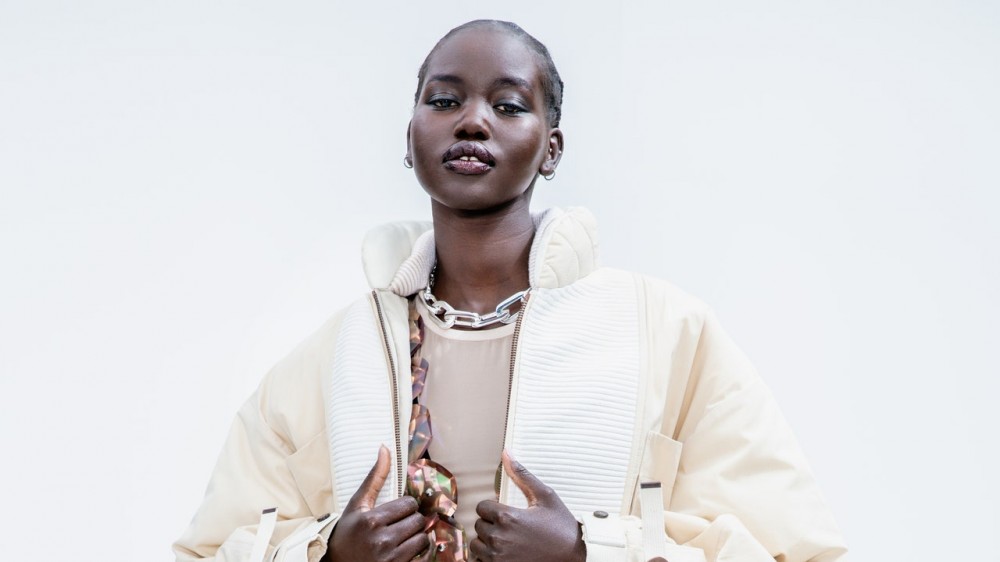 How to Describe Comfy Basics Paired With Sequins and Shine? Practical Magic 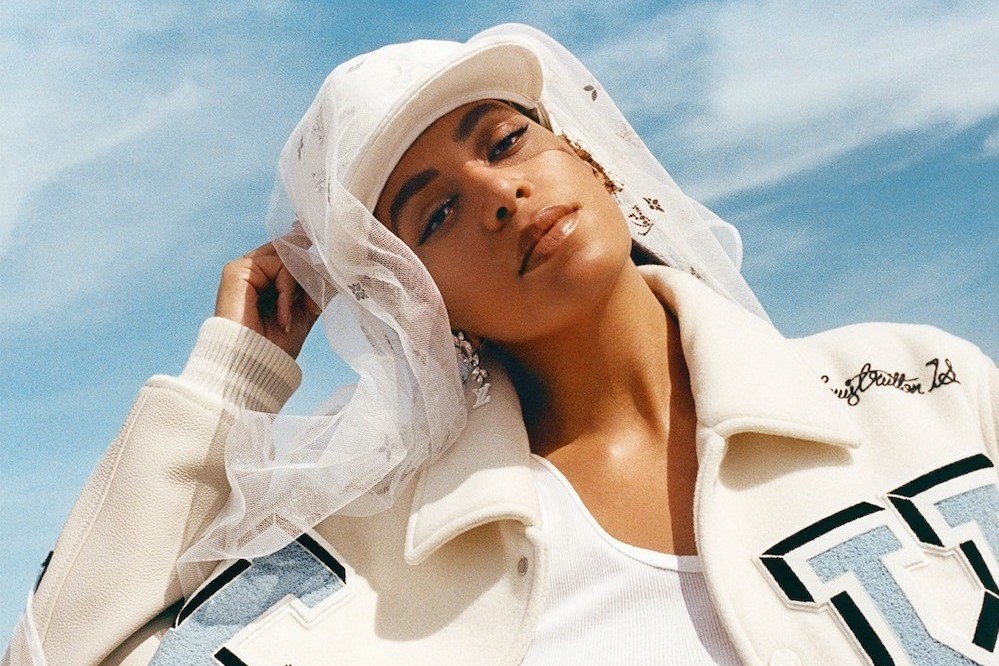 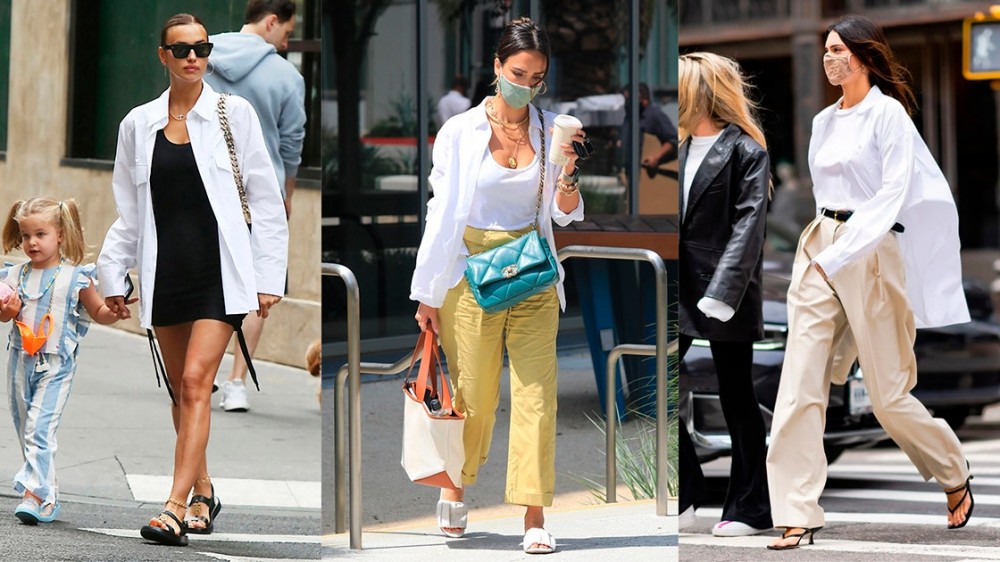