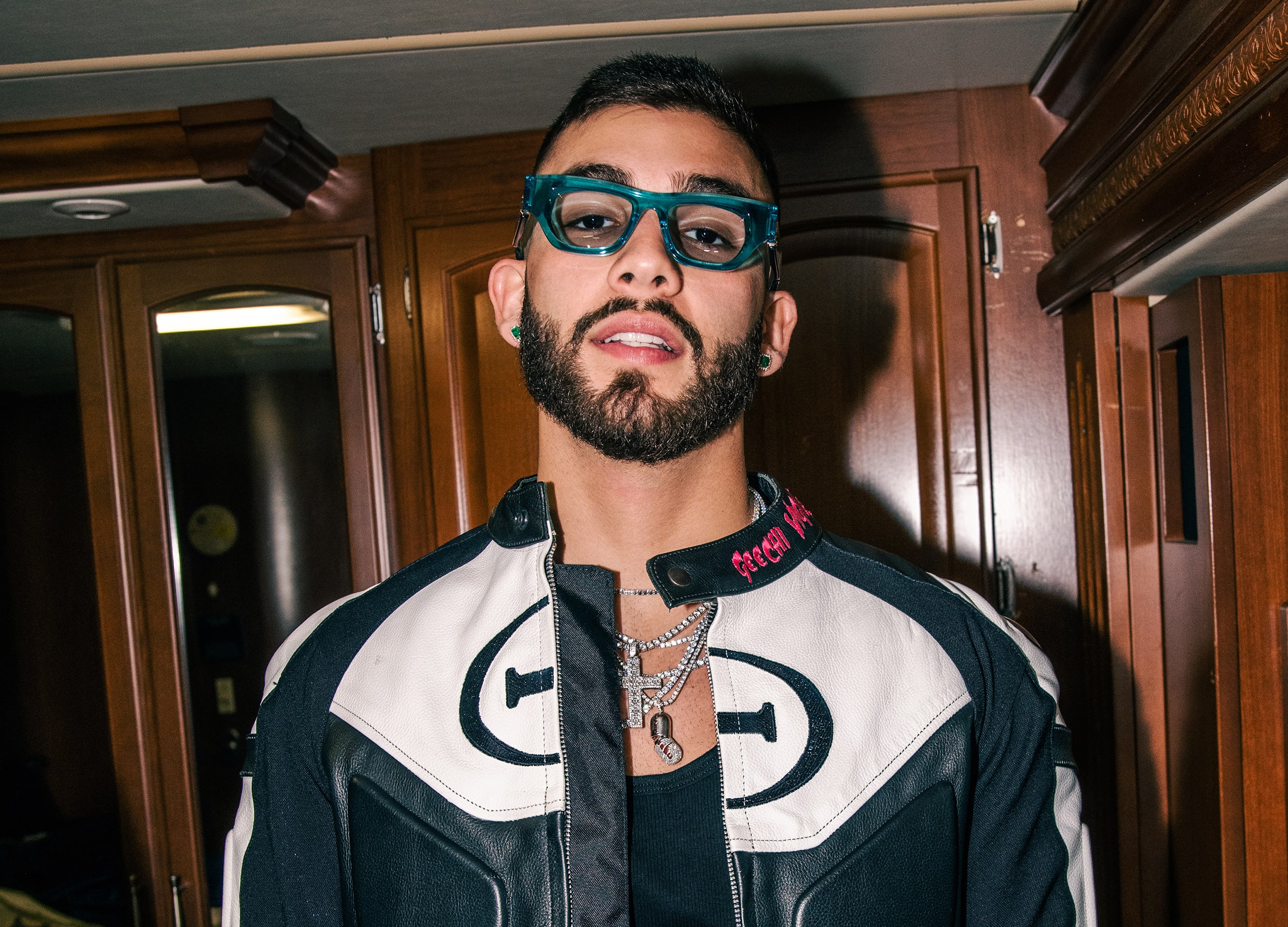 This is our weekly compilation of newly released bite-sized song reviews from our talented music writers. Discover new favorites, read nuanced criticism of the week’s hottest releases, and much more. Who knows, you might walk out of this with a new fave or two. Some of the featured artists include Manuel Turizo, RaiNao, and Flor de Toloache. Follow our playlist featuring these tracks and more on Spotify or Apple Music.

Colombian artist Manuel Turizo’s “La Bachata” is a breath of fresh air when it comes to his extensive catalog of pop-reggaeton hits. The video starts out with a throwback moment, a home-recorded video that gives us a nostalgic feeling. The mood continues when the artist then puts on a burned CD on a CD player that starts the bachata-inspired track. In the heart-wrenching “La Bachata,” Turizo shows his emotional side, serenading about a lost love that he can’t get over. However, in the end, he walks away from a background scene of red roses burning, presumably symbolizing that the past is finally history – as it should be. – Jeanette Hernandez

Three months after dropping her debut EP, Ahora a.k.a. Nao, to rapturous fan acclaim and critical praise, the San Juan native has released a new single, “Fuega,” already planting the seeds of her next project. Ever sticking with her favored themes of agency and exercising the freedom to party, the track huddles around RaiNao’s vocals with a looped pattern of staccato violin notes and perreo drums, alternating between the two and dictating the rhythm. “Tonight we don’t sleep, fuck it, I’ll sleep when I die,” sounds harsh on paper, but RaiNao wants you to imagine having such a blast with her music it becomes reasonable. — Juan J. Arroyo

Built around samples from the perennial ’90s hip-house classic “Gonna Make You Sweat (Everybody Dance Now)” by C+C Music Factory, in the hands of hitmaker Boy Wonder Chosen Few, it becomes a modern showcase for three generations of emcees to shine. Constantly chopping and mangling the beat — taking it from classic four-on-the-floor dance to dembow and back again — “Pa’ Que Sude” becomes an irresistible dancefloor filler with the eclectic mix of rappers. From Latine star Jon Z to legend Jadakiss to rookie Shootter Ledo, they all flex in grand ways, playing with nostalgia while keeping it fresh. — Marcos Hassan

NYC’s Latin Grammy-winning, all-women ensemble Flor de Toloache paints with such a broad and vivid musical palette that it regularly keeps them at the forefront of any conversation on what it means to be a mariachi artist in 2022. Their latest single, “Soledad” (produced by longtime Mon Laferte collaborator Manú Jalil), is no exception and gives listeners a glimpse of what to expect on their forthcoming album, the follow-up to the alternative rock-tribute compilation, Florecita Rock-ERA. “Soledad” draws on grand-scale R&B choruses and showcases the group’s signature striking harmonies alongside lush, deep-bodied guitarron. – Nayeli Portillo

Voracious and versatile producer Captain Planet has linked up with longtime collaborators Zuzuka Poderosa and Rafael Futura for “Moqueca,” a delicious serving of Brazilian retro disco and the first single from his forthcoming EP Sounds Like Home. An ode to the popular Brazilian fish stew of the same name, the equally comforting track harkens to classic funk parties of the ‘70s and ‘80s with its breezy percussion, shimmering synths, and Zuzuka’s playful, effervescent vocals. – Richard Villegas

Lisbon-based artist Soluna has served as one of the most in-demand artists out of the Portugal scene, and it’s no different with her new music video and track, “GANO,” off the GANO EP out today (May 27). What makes Soluna so distinct is her effortless fusion of Latine pop and Afro beats that reflect an intimate story of sonic exploration and holding the identity of an Angolan-Argentian. The track comes together at the crossroads of reggaeton and tarraxo, concocting a rich sound you can’t forge just out of necessity, yet Soluna does it perfectly. The video accompanied is also a story of success and a celebration of independence. For the summer right around the corner, it’s the kind of anthem we need. – Holly Alvarado

Spanish boy band Cupido make their return with their first album release, Sobredosis De Amor since their debut in 2019. On the single “Almohada,” the band led by trap artist Pimp Flaco shows off their mastery of transforming more modern veins of reggaeton, trap, and pop into a revitalized style of more classic indie-pop punk sounds of the early 2000s. The single displays these signature sonic nods by its use of simplistic and upbeat electric guitar riffs, choppy and boisterous drum fills, and auto-tuned vocals as the lyrics lead us through dancing away the thoughts of missing someone and keeping them alive through memories despite knowing it’s time to move on. – Jeanette Diaz

Known as co-operator of modern Mexican psych-rock heroes Lorelle Meets The Obsolete, Lorena Quintanilla trades swirling guitars and dreamy soundscapes of this band for something that resembles alien Top 40 music. Under her J. Zunz moniker, Quintanilla immerses herself in electronics to find a new facet to her creativity. “Outsides” hits overdriven levels of emotional and sonic intensity as her whispered vocals collide with glitchy drones. This track is an explosion of digital hardcore euphoria. — Marcos Hassan

Puerto Rican trap/R&B fusion group Los Rarxs kick off the rollout of their upcoming freshman LP, La Rareza, with the dynamic “No Tire Foto.” Seeped in jungle breaks, omnipresent hi-hats, and the wicked fast-spitting flow they’re known for, the song also features a guest collab from fellow local up ‘n’ comer Nester who lends some extra storytelling gravitas. Vento Alejandro’s chorus vocals set the saucy vibe, opening the door for fellow band members Erre and FOKINFROID to put down their own raw verses that notch up the intensity. It’s an honest-to-goodness party banger that can get “locos” to sing along at the top of their lungs — but no photos, please. — Juan J. Arroyo

The Panamanian artist Akim just dropped one of this summer’s newest hits with “Paragua,” collaborating with Dominican producer Maffio. With a hypnotic Caribbean-infused drum beat, the two created an easy-to-listen-to banger that gets the listener wanting more. It goes without saying that the beat paired with Akim’s distinctive chorus puts this infectious party track on repeat. And let’s not get started on the song’s video – it undoubtedly gave us FOMO. – Jeanette Hernandez

Hunters of the Alps – “Miedo”

On “Miedo,” Mario Giancarlo Garibaldi (aka Hunters of the Alps) leads with a sincere yet haunting confession that’s bound to make any first-time listener do a double take: “Tengo miedo que me veas por quien soy/Que me juzgues por las cosas que no hecho.” The Miami-based solo artist croons beside a charango and pneumatic sax, channeling a mix of what Garibaldi describes as early pandemic “fear for the world to come” and a sense of eagerness to hone in on unfinished material. The result is a smooth, pop-minded progression that simultaneously shows Hunters of the Alps’s affinity for musical influences like Juan Gabriel to Roxy Music. – Nayeli Portillo

The R&B Dominican Republic artist David Appleton releases his new single “Adios,” infusing Latine flavor with a seductive neo-soul quality that you can’t deny nor ignore. “Adios” is a track that reflects on relationships based on material obsessions rather than love. With an intimate, love-sick track such as “Adios,” Appleton serves fans a taste of what’s to come for new music, and “Adios” is perfect for now. – Holly Alvarado