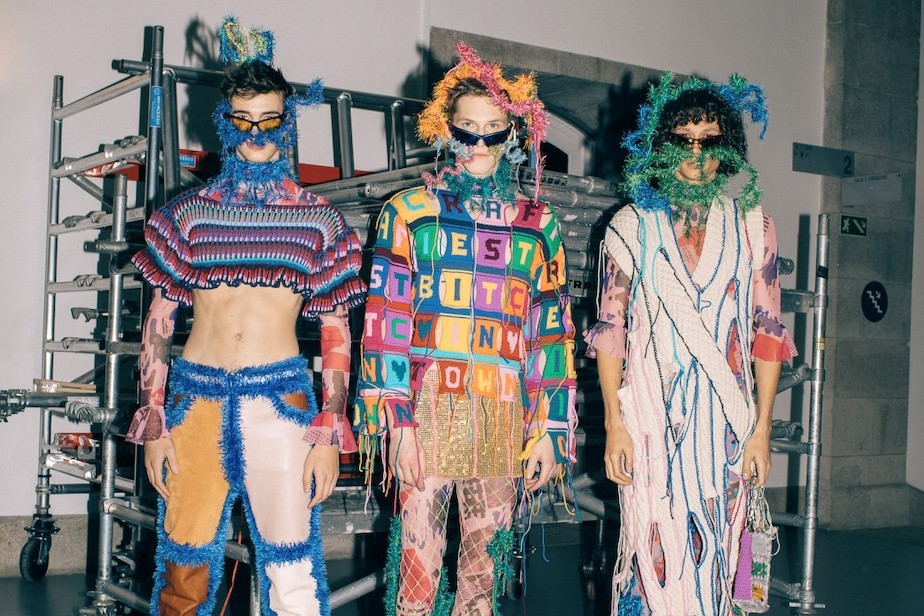 In Porto, porcelain churches cling to craggy hillsides, shabby alleyways crumble into the mouth of the Atlantic, and chestnuts crackle into a smoke on street corners. Yet, inside its picturesque terraces, latticed with washing lines and the sing-song calls of street vendors, are rooms filled with fleshy gimp suits, profane bunting, and fashion models brandishing kitchen knives.

Last week, emerging designers from across the European continent gathered in the city to compete in the 2021 edition of ModaPortugal, the Mediterranean’s answer to Project Runway. Backdropped by members of the international fashion community, students from fashion schools in London, Paris, Geneva, Italy, Portugal, and Helsinki showcased three looks to a jury of editors, designers, and creative polymaths, among them Dan Thawley, Tuomas Laitinen, and Tiffany Godoy. With the event culminating in a barnstorming showdown during the Portuguese equivalent of the Fashion Awards, the stakes were dialled high. Not least because they were thousands in prize money up for grabs but because, for many, it was the first time they had left their home countries in over two years – let alone presented a collection on international soil.

With the threat of Omicron looming and cities falling into lockdown, designers felt as if they were showcasing on stolen time, which added, at least anecdotally-speaking, a frisson of tension to the usual proceedings. Regardless, these burgeoning talents absorbed all the chaos of the current moment and turned out luminescent collections which were both hopeful and kinky – because angst is metabolised in more ways than one. There were 18 offerings in total, some of which plundered childhood memories, wading through worries, desire, and subconscious emotional territory, while others were the result of wild, imagined worlds, moored in complete fantasy. Below, we list the designers to watch from this year’s iteration of ModaPortugal.

There was an awkward pause before Paulo Mileu’s collection began to trickle out onto the runway. Yet while his overblown, wildly theatrical designs may suggest otherwise, this wasn’t for dramatic effect. It was simply because his models struggled to walk in their clunking heels, careful not to fall and impale themselves on the kitchen knives they were made to brandish. Intentional or otherwise, that tension spoke to the way in which Mileu’s designs tread the line between constraint and freedom. One of the only designers not to reference themselves within their work, the Polimoda graduate’s work told the story of a “broken marionette stuck in a bubble of control”. Swollen silk pants, spiralling whorls of brocade, and plush Ugly Sister gowns conjured a regal image, only, it wasn’t clear whether these kings and queens were not, in fact, dictators. “Presenting my collection to a whole new audience made me very happy. Especially after winning the award for best Italian designer. It just made all the hard work and sleepless nights all worth it.” Milieu can’t – or won’t – speak about the future just yet, but he’s realised that “nothing in the world” will stop him working on his brand. “My goals require time and patience. I’m here for the long run, not just the moment.”

Some of the first looks to bundle down the Alfândega were that of Juha Vehmaanperä, a final year student from Aalto University in Finland. Monstrous and slutty, the designer’s work marries unruly, kaleidoscopic knitwear with glimmering miniskirts and fishnet stockings. Folksy sweaters were shrunken to bralette proportions while leather slacks had been trimmed with what looked like tinsel or pipe cleaners. Elsewhere, squares of lettered bunting were looped about the body to spell “the craftiest bitch in town”, which has become something of a moniker for Vehmaanperä. Though it may look more Monsters Inc than pop-punk, the collection was inspired by Shampoo, a British band from the 90s, who reminded the designer of all the trashy, popular girls of his childhood. “I always dreamt of being as cool as they were so I created pieces that I would’ve loved to wear back in time but was too afraid to do so,” he says, “Shampoo’s wardrobe was full of colourful things. Miniskirts, crop tops, shearling coats, bits of denim, and a rebellious attitude, which I just love.” Having deservedly bagged the award for best Finnish designer, he’s vowed to spend the $1000 prize money on yarn so he can do “more cutesy and rebellious crafts!”

The overall winner of ModaPortugal 2021 was Tiago Bessa, a student from MODATEX university in Porto, who was crowned for their Hermaphrodite collection. “The word hermaphrodite has been attached to me for a long time,” Bessa says, “growing up, people used it to mock my feminine looks, so this was about directing my anger into a productive direction.” As the designer began to research the limits of binary gender, they were struck by the number of non-consensual surgeries that are undertaken on interesex children. “I felt like it was an important topic to bring to the table,” they add. As such, Bessa saw their garments as “deconstructed versions of ideally perfect pieces” as a way to comment on the damage caused by corrective procedures on already beautiful bodies. There’s an almost anatomical quality to the clothing, with translucent gimp suits and flesh-coloured ball gowns constructed with abstracted genitalia shapes. Corseted dresses are built with flaps of triangular fabric which overlap like petals on an orchid – a hermaphroditic flower. Though the judges’ decision was unanimous, Bessa “was not expecting to win at all, especially since my competitors were so strong”. With an internship at Viktor and Rolf’s couture line in the pipeline, Bessa has decided to invest the $2,500 prize money in a Masters degree.

Mathieu Goosse doesn’t work with images, visual references, or moodboards – it’s the more abstract world of “emotions and sensation” which form the Institut Français de la Mode graduate’s entry point into fashion. As a result, Goosse sees his creations as objects rather than clothing. “Pure, detached, and independent, they can speak to or touch everyone. They’re essential forms that can belong to anyone,” he says. This collection, I’d Like to See You, is inspired by the destructive impulses of obsession, which he translates to deconstructed two pieces made from peeling python skin, razor-cut sanded-silk gilets, scantily-clad eagle breastplates, and spindly body-cobwebs crafted from string beads. “It revolves around the ideas of exhaustion, love, and reduction,” which explains why the looks feel so washed-out and fragile, like they’ve been put through the physical and emotional wringer. “I had so much fun with the Finnish,” Goosse says of his time in Porto, “I miss them already!” For now, though, he’s back in Belgium where he’s working on a furniture and object line. 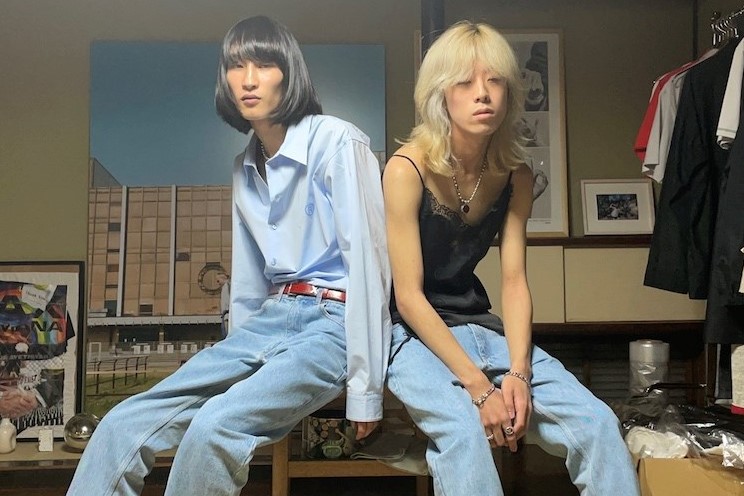 Going through the keyhole with Martine Rose’s global community 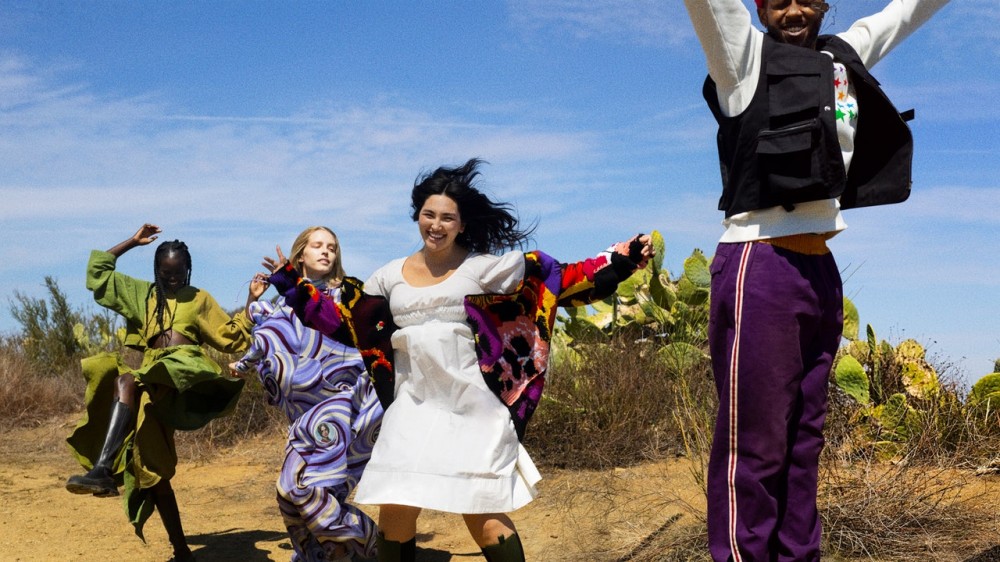 Ant Clemons, Empress Of, Sir Chloe, and More Musicians Fashion a Festival All Their Own 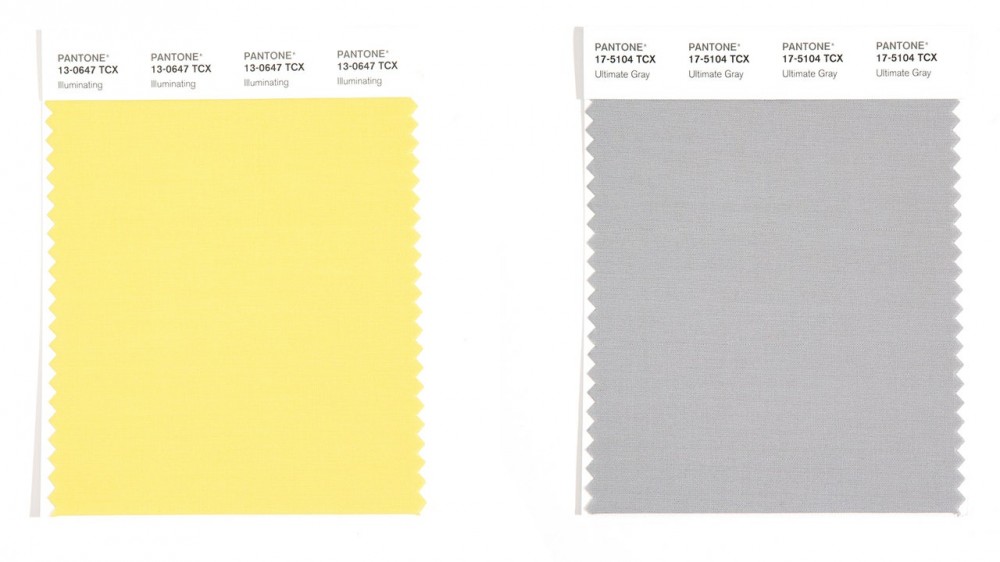