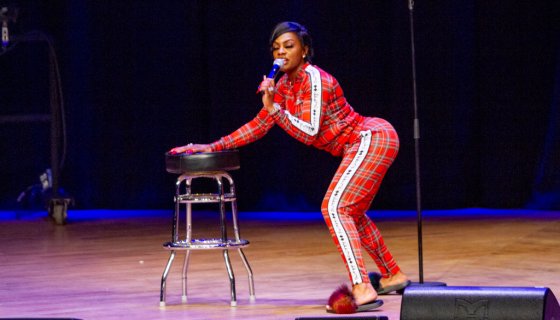 “comedian” Jess Hilarious is being dragged up and down timelines once again. Hilarious who was once riding high is now the bane of social media and her recent actions aren’t helping her get out of the hole she dug for herself. For some reason, the social media personality thought it would be a good idea to do a reenactment of Megan Thee Stallion and Tory Lanez’s alleged shooting situation for a skit called “Mystery Media Crime.” Heads up, it wasn’t funny at all.

Mystery Media Crime ? Ep 1 ??COMING TO YOUTUBE SOON?? ➖➖➖➖➖➖➖➖➖➖➖ Disclaimer: I do not condone violence in no way, shape, or form . This is strictly for entertainment purposes.

While she might have thought she got one with her latest skit, Twitter quickly commenced to dragging her again accurately pointing out that it was not the knee-slapper she thought it would be.

does she think she’s funny pic.twitter.com/ehPN43ecx0

Jess Hilarious is the latest bozo to called out for making fun of Megan of getting shot, in both feet, the rapper revealed in a very emotional Instagram Live session. Draya got for a bad joke she made on an episode of Van Lathan’s podcast. thought it was funny to share some memes making light of the incident, he has since apologized claiming he didn’t think what happened “was real.”

You can peep the well-deserved dragging of Jess Hilarious in the gallery below.

Jess Hilarious reminds me of that girl in High School that always tried to clown someone in front of other people to look cool but wore the same huarache’s while eating hot cheetos and drinking an Arizona for breakfast. pic.twitter.com/gxoOZNB7sp

Jess Hilarious posting that “re-enactment” of Meg’s shooting for “entertainment purposes”, after Meg shared her feelings today, is incredibly violent and ugly.

4. She was never hilarious.

I don’t know what Jess Hilarious goal was but I don’t see anything funny about this shit at all. Folks really turning Meg trauma as joke. Sad part is Jess a whole comedian and still suck? https://t.co/6c8i1VmHzu

The only time Jess Hilarious was funny was when she was taking care of that married man’s nine children. https://t.co/Jl5QMPq6l2

Jess Hilarious has a career built on messiness and pick-me rhetoric. Girl, go get some therapy so you can figure out why you don’t like yourself and other women.

Y’all allowing JessHilarious to continue to exist is the craziest thing to me. https://t.co/iu2jxzQsvZ

JessHilarious posted that absolutely horrific “reenactment” of Meg getting shot and B. Simone liked it. Where is cancel culture when you need it?

For her name to be jesshilarious… she sure is anything but

I'll never forgive the people who gave Jess Hilarious a career. In fact, I'd like a word pic.twitter.com/wA9qpQWjIU