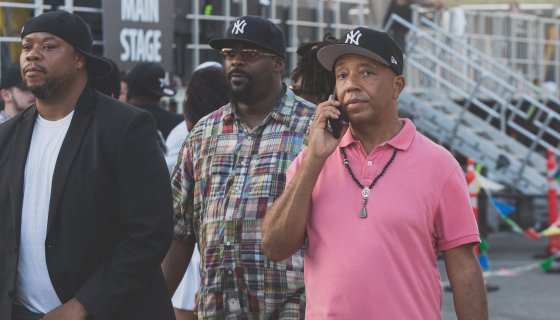 The Breakfast Club is on a roll when it comes to giving platforms to people undeserving of them.

Moooorrrniiiinnnnggg everybody, Twitter is once again rolling their eyes at , DJ Envy, and Angela Yee after another headass decision on their part. Folks asked how they could follow up their ridiculousness after interviewing racist conspiracy theorists ? The Breakfast Club told listeners to hold their beers and decided to give the runaway accused ual predator Russell Simmons a platform.

The trio interviewed Simmons Wednesday morning (June 10), allowing him to address the . Of course, he just spewed hot air, saying he is only guilty of being a creepy womanizer, brought up the movie How To Be A Player, and based his innocence on lie detector tests he took.

“I’m guilty of having underwritten, supported, made soundtracks for, taken advantage of, and lived in a grossly unjust society…I made the movie How to Be A Player. Bill Bellamy played me. So I know what I’m guilty of. I’ve been unconscious as a playboy. So today, the title is appropriate. Womanizer. I’m guilty of that. And back then, I thought it was a game…There were no Black actresses that I didn’t date. But they’re my friends today. I went out every night and looked for new girls to date. These are my friends today, and they don’t have the experience that the movie makes me to be.

I could never say that someone doesn’t feel victimized. These stories are 20-30 years old. I can say that I don’t feel that I victimized them. How can I say that? I took three 9-hour lie detector tests.”

There was barely any pushback from the radio hosts, but Envy did ask what Simmons would tell his daughters who have come to the defense of their dad despite him looking guilty as f**k.

As expected, Twitter was not here for the interview and dragged the morning show for once again wasting people’s time and allowing someone who doesn’t deserve a large platform to spew utter nonsense. You can peep all the reactions below.

Imagine, in all of this, prioritizing Russell Simmons' story

You’re a fucking rapist and you can’t hide forever, @UncleRUSH.

The Breakfast Club let Rush Limbaugh on, then followed up with Russell Simmons. I’m convinced they will let anybody on air

This is a TOXIC mess. @UncleRUSH is a serial rapist, and many of his victims are Black women. Yet @cthagod gives him a platform in the midst of a noble quest for Black liberation. We'll never get this foot off of our necks as Black people, if we don't love ourselves. https://t.co/8bZUr4JFpd

Let’s have a public conversation about my allegations @unclerush. Instead of you declining to be interviewed for @OnTheRecordDoc and then using friendly outlets like @breakfastclubam to allow you to speak unchallenged.

To be CLEAR @cthagod @breakfastclubam Your boy @UncleRUSH was stone-cold sober when he raped me. He tricked me. Said he’d ordered me a car. Told me to pick up a demo while I waited. Minutes later he emerged naked, wearing a condom and RAPED ME while I said NO, fought, and cried. https://t.co/yofn0VNmnQ

The same Russell Simmons that stepped down from all his companies & moved out of the country when multiple violent rape cases were opened against him? That “Uncle Rush”? https://t.co/PSPWIjgN0k

Russell Simmons is not the first ual abuser The Breakfast Club has had on and he won't be the last.

Why? Would you have Harvey Weinstein on? Cause that’s who Russell Simmons is. Turning your back on the women who have been brave enough to speak out… pic.twitter.com/wdrh0QhzP2

Fuck everything about this. Kelis says $100,000 a year in support from Nas is not enough after he made $40 Million from RING investment –