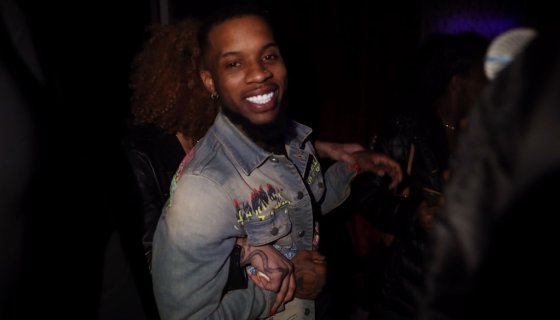 is not here for ‘s loose lips and decided to let him know on record.

On Saturday (July 11), Lanez decided to drop his new song inspired by Jada Pinkett’s now-infamous  interview with husband, , discussing the then rumored .

After the jokes began to fly, Tory Lanez weighed in sharing his remix to Lil Baby and 42 Dugg’s “We Paid”, Lanez made sure to announce where his allegiance lies, calling out the Forever and a Day singer for “snitching” about the affair.

“Let me start f*ckin’ on Jada, I ain’t gon’ snitch like August,” Tory raps on the beat. “Look at her face like Will…”

Why #torylanez said he ain’t finna snitch like August ???

While he may be sending shots on behalf of the Smiths’ matriarch, on Friday (July 10,) the “I Luv This Sh*t” singer did take to Twitter to crack a few jokes at the expense of Pinkett-Smith, clarifying to his previous trysts who may have questions that they were indeed in an “entanglement.”

“Letting all my ex’s know they were all entanglements and not real relationships,” Tory Lanez wrote.

Letting all my ex’s know they were all entanglements and not real relationships ?

Tory’s lyrical jab to Alsina is the latest in a series of shots that the Canadian crooner sent to others in defense of Black women. On Saturday (July 11), Lanez sent a subliminal message to ex-NFL linebacker Kyle Queiro after the former player was “shocked” that people found soulful songstress Jill Scott y.

As of press time, there was no word about if or when the teased remix will drop, over the weekend Lanez released two songs as part of the VVS Capsule, “Stacatto” and “392” with VV$ Ken; check out the visuals for both below. Singles Club: We all woke up in a fucked-up America