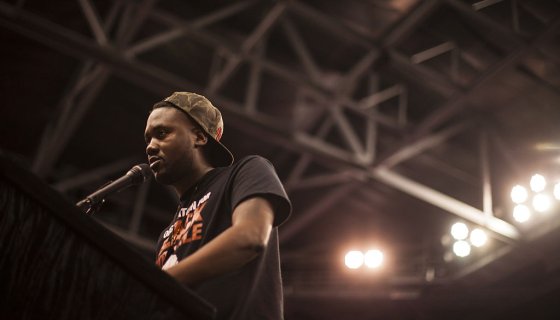 might be best known to the masses as a passionate and devoted activist in the wake of the Ferguson protests just outside his native St. Louis. The rapper, activist, and educator is one of the founding members of Black Men Build, a new initiative that aims to challenge Black men to use their collective power for the betterment of their communities tangible, less performative means.

Tef Poe, along with co-founders Phillip Agnew and Steven Pargett, formed Black Men Build to address the severe rift between Black men across the nation and to galvanize them under a firm banner that will fortify existing and like-minded ideological shifts. In our brief chat with Poe, we learned that he and his colleagues are framing BMB as a ground-up organization that will lean on each other to refine and uplift those who need help the most.

“Black Men Build is a container and a collective of artists, athletes, Black men who work every day 9 to 5s, people that are in unions, that are fast-food workers, lawyers, doctors, the vast diaspora of Black male identities who are attempting to politicize ourselves,” Tef explained in the opening segment.

He continued with, “We’re gathered to understand this moment we’re in a little deeper, and figure out a way that we can finally humble ourselves and move as an organized force in this.”

The conversation shifted into examining the primary goal or objective of BMB, with Tef saying with certainty that this organization’s aims are to shore up the fragmented sections of Black manhood in order to be better partners and allies for Black Women.

Poe adds, “I think Black women are on the frontlines with that in all cases and through all generations. And I think with BMB, we have an agenda that allows us to care for ourselves because if we care for ourselves when we will automatically and wholesomely care for Black women in the right way. BMB is based on the foundation that if the original man and the original woman are connected, humanity can begin to restore itself.”

Poe’s resume as an activist will have most pointing to his work in Ferguson. And his time as a Nasir Jones Hip Hop Fellow at Harvard University informs that he is beyond qualified to work in tandem with other thought leaders in an increasingly crowding space of activists and public figures under the common theme that Black lives uniquely matter, to borrow a longstanding phrase from the movement founded by Black women.

BMB’s platform is a simple and direct one based one what can be found on its website:

We are Black Men working with Black Men to serve our communities, to be critical free thinkers, to speak truth, to teach others, and to build the social, economic, political and spirituals tools needed to evolve and power Black futures.

Black Men Build represents a wide group Black men from all walks of life — community organizers, artists, communicators and creatives who have come together to grapple with issues that are challenging Black men.

Coupled with an online pledge and other resources, including a survival guide that addresses health, the COVID-19 pandemic, and how to properly move about the nation as Black men, BMB’s aims are not unlike those of the Black Power movement but with a hope that infiltration or coopting will never be an option, while also keeping the lines of communication open with those with methods and focus that differs with their own.

Poe also expressed the importance of being engaged on a local level politically, leveraging the power of the vote to put officials in office that work in favor of the people instead of pushing the agenda of the current administration, which has increasingly proven it does not hold the Black community in high favor.

Tef Poe and the Black Men Build organization has started monthly Mass Meetings, the second of which will go live tonight (July 15) and 9:00PM EST webinar. Poe informed us that tonight’s meeting will cover a range of topics, including the upcoming NBA season, COVID-19, and other planned actions in the coming year, which also included a political school set to launch in August. Rah Digga Down With T.I.’s Purity Posse, Says She Checked Daughter’s Hymen Too MAYHEM: 'Cursed In Eternity' DEAD-Era Box Set Due In November