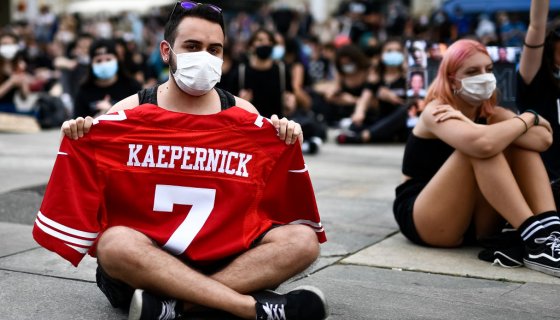 The NFL is still soaked in systemic racism. So Roger Goodell recently going on the record as supportive of a team giving a shot rings particularly hollow.

Last week, Goodell made the news for issuing a statement—only after being shamed by star players—that and opposed to the systematic oppression of Black people. Glaringly, he never mentioned Colin Kaepernick by name.

The snub was particularly egregious considering everything Goodell was talking about was during the 2016 season.

But now, during ESPN’s The Return Of Sports special Monday night (June 15), Goodell said, “If he wants to resume his career in the NFL, then obviously it’s gonna take a team to make that decision. But, I welcome that, support a club making that decision, and encourage them to do that.”

Twitter isn’t buying Goodell’s sudden sense of righteousness. It sounds more like he’s saying whatever it takes from the league’s financials from taking a hit. Particularly during these times of unrest when any sort of slights to Black people and Black athletes are not being tolerated.

Kap has been continuously training for an NFL return. And it must be noted that Goodell is even willing to have Kap participate in social justice programs with the league, which is major since being silenced was something he was not willing to do in order to play.

Added Goodell, “If his efforts are not on the field but continuing to work in this space, we welcome him to that table and to help us, guide us, help us make better decisions about the kinds of things that need to be done in the communities.”

Twitter is still keeping its eye on the jig, though. Peep some reactions below. Also, where’s that apology?

Goodell: “I encourage an NFL team to sign Kaepernick.”
pic.twitter.com/bBrnQSGw6T

"Any club may sign Colin if they choose to do so," an NFL spokesman said. https://t.co/MeETQwOClm