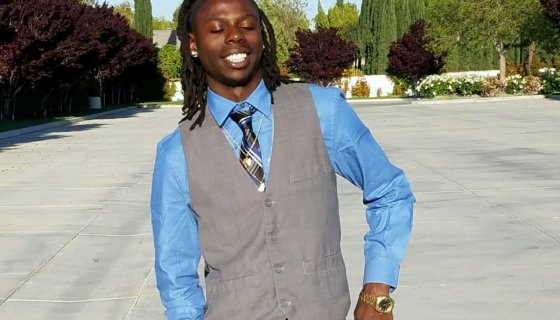 A grim discovery earlier this week in California has sparked a demand in answers from protestors who are already entrenched in a battle against . In the city of Palmdale, Black man Robert Fuller was found hanging from a tree near City Hall and an investigation has been launched to determine if foul play was at the root.

As reported by LAist, Fuller, 24, was found hanging from a tree in a park near the city hall early Wednesday morning. A lieutenant with the Palmdale sheriff’s department told the publication that their initial findings are pointing to suicide but outside observers are not convinced.

“From initial investigation of the scene and everything we’ve recovered, all signs right now lead us to believe this was a suicide,” the lieutenant said. “Without going into too much detail, it doesn’t appear there was any sign of a fight or struggle.”

Fuller’s sister, Diamond Alexander, has used Facebook to get out the word regarding her brother’s mysterious death and has launched a GoFundMe to help with memorial efforts.

Sadly, Alexander had to issue a statement her Facebook page that a number of heartless individuals are attempting to capitalize on fundraising efforts and have created fake GoFundMe pages. Alexander set a $100,000 goal GoFundMe and has exceeded that amount with the most recent tally in at $148,000.

On Twitter, the hashtag #RIPRobertFuller has been trending over the course of Saturday morning with some sharing footage of peaceful gatherings at the site of Fuller’s death, calling the incident an alleged . Alexander, who currently lives in Arizona, has vowed to remain vigilant and will return to the park in protest.

to everybody that's been protesting in LA. Palmdale is an hour away but also a WORLD away. Palmdale has a lotta dorks (read: WHITE SUPREMACISTS).

Show them this shit isn't okay.

Peaceful protest held today for a young Black man in Palmdale, CA who was found dead, hanging from a tree.

This should be all over national television!

A black man got lynched today. Not 40 or 50 years ago. TODAY. What the FUCK. #RIPROBERTFULLER #BlackLivesMatter https://t.co/wJ8ACNAbXv

I'm sorry, a young black man is found hanged, from a tree, next to a city hall… NOW… and the first thought is suicide, after less than a day of investigation?#RIPRobertFuller

What black people in 2020 hangs themselves with a rope on a public tree????? In 2020?? Public suicides are TYPICALLY done by jumping off a bridge or off a roof top but a public hanging…..we are not stupid…..#RIPRobertFuller

I found what I think is a video camera on top of a nearby building that overlooks the park. Someone should see if it's working & saves footage. I live on the east coast, so I can't do much from here, but all the info is on these screenshots from Google Maps.#RIPRobertFuller pic.twitter.com/M8NzZ5RREJ

Would a suicidal young black man choose HANGING? I don't buy it. Palmdale PD, do your jobs. #RIPRobertFuller #BlackLivesMatter

Seriously what is wrong with this fucking country #RIPRobertFuller

I really hope they don’t do Robert Fuller like they did Kendrick Johnson. We all know damn well Black people don’t commit suicide by hanging themselves from a tree. This whole story sounds fishy af #RIPRobertFuller #JusticeforRobertFuller #BlackLivesMatter