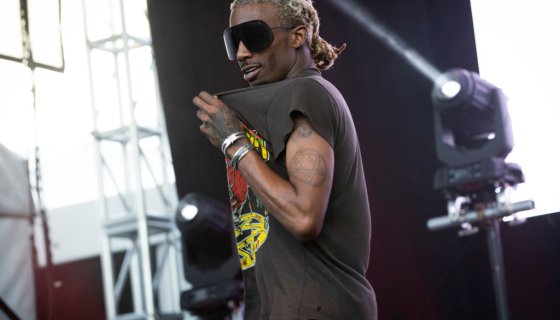 Playboi Carti landed himself behind bars after law enforcement made a startling discovery in his vehicle.

Carti woke up to folks talking about him in a cell. The Atlanta Journal reports that the rapper born Jordan Carter was arrested on Thursday (Apr.2) on gun and drug charges. According to the publication, authorities found three guns, 12 bags of marijuana, Xanax, codeine, and oxycodone inside Carti’s Lamborghini, according to the report. The Journal also reports another man named Jaylon Tucker was also arrested.

Per the Clayton County Sherriff’s Office :

“Jordan Carter later identified as Atlanta rapper “PlayBoi Carti” and Jaylon Tucker, we’re both taken into custody, and they are now facing the wall at Georgia’s toughest para-military jail known as the Hill-ton.”

This isn’t Carti’s first run-in with the law, back in January 2019, he was convicted of trashing a tour bus and punching the driver in Scotland back in 2018. He was ordered to pay $1,030 for the assault and $386 for the window he allegedly broke.

In July 2017, he was arrested for domestic battery after he was seen grabbing a woman by her backpack and shoving her into the back of an Uber at Los Angeles International Airport. He was released on a $20,000 bond, and the charges were dropped the next month.

Of course, the internet has reactions to Carti’s arrest. You can peep them below.

someone said this was carti going to jail??? pic.twitter.com/BKhadw7neN

Carti was out here moving like Pablo Escobar pic.twitter.com/VqEHAcCwxv

Me and the homies going to free Carti from prison pic.twitter.com/yE8TkpCqLs

woke up to see Playboi Carti been arrested pic.twitter.com/yarX0H3aiV

Carti got arrested with gun charges, bro was messing around with the wrong uzi ???‍♂️

LMFAOOOOOOOOOOOOOO CARTI WAS TALKING TO THE COPS IN HIS BABY VOICE pic.twitter.com/k0E6ZAewZp

“yo, free carti bro, he aint do nothing wrong bro slatt free the slime ?” pic.twitter.com/7tl5cNNhqe

BREAKING: The Feds TRADE 6ix9ine for Playboi Carti giving the world more stress and anxiety, WLR postponed even longer, and making 2020 even more shitty that it already is. Free carti man ? #FREECARTI pic.twitter.com/7RNtjzJUqX

I guess we aren’t ever getting Whole Lotta Red… pic.twitter.com/sr7LNTaY9R

Playboi Carti when the cops asked him why he had 12 bags of weed in his car pic.twitter.com/L0tn4N9JKn

Uzi on his way to free carti #playboicarti pic.twitter.com/qNHkk9EvNH Jamie Foxx Accused Of Backhanding Woman With His Penis, Promises To Fight Charge