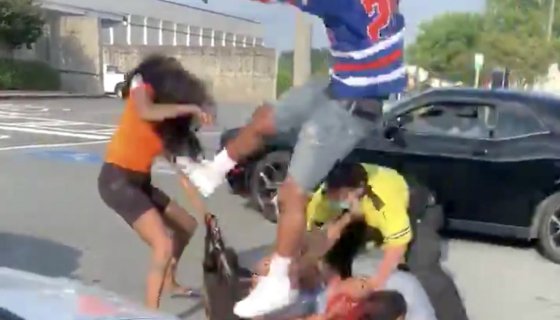 With the state of largely free to resume business as semi-normal, people are taking to the streets in droves while others are remaining shut down . Outside of what has been said to be Atlanta’s Cumberland Mall, a fight between a group of women was broken up by a man delivering a dropkick to one of the assailants, kicking off a series of reactions on Twitter.

Twitter user @Kevinvalencia_ shared video footage of a fight between two women that spilled onto the ground. A third woman tried to intervene as it appeared one woman was getting the better of her friend. A security guard was trying to break apart the fight and suddenly, a man came flying in feet first and pushed the woman trying to help away while then shoving the security guard off.

The man scooped up the woman he was trying to assist and the pair walked off as the video was cut short. With the video beginning to get shared widely on Twitter Wednesday morning (May 6), some were able to determine that they knew the location of the incident. That then turned into a series of jokes about the flying foot fade, the fact that folks are acting out of character due to being cooped up for weeks and slamming the mall for being a hub of the struggle for quite some time.

Details about the fight aren’t known but that hasn’t stopped Twitter from dropping heavy assumptions or from getting those jokes off. We’ve collected those reactions below.

I am definitely this guy in the charger ?? pic.twitter.com/q0aVddxHQl

See I knew I wasn’t the only one who noticed that ? He out here passively drop kicking bitches in the name of love

If my man don’t help me like this though??‍♀️ and he better put my ass in check after too. But help me even when I’m wrong.?

These Cumberland mall tweets got me lol this morning!!

Y’all better get back in the house, clearly y’all weren’t ready to be outside ?

I know Cumberland Mall when I see it lmfao https://t.co/BJRaQ6ps6A

*sees why Cumberland Mall is trending* y'all wilding on the first day back in public pic.twitter.com/5ZN04eKFLM

That dude seeing the video of himself flying kick the girl in the cumberland mall parking lot pic.twitter.com/wJWVUhyTuT Here Are The Winners Of The 2019 MTV VMAs #VMAs