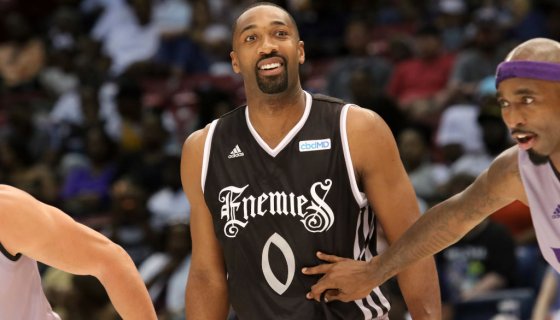 Gilbert Arenas Apologizes To Lupita Nyong’o For Past “Coon Behaivor”

If you follow , you know he lives up to IG handle “No. Chill. Gill.” Well, in a stunning move, Arenas seems to be atoning for his trolling ways.

On Tuesday (Jun.16), Arenas hit Instagram and posted an apology for what he described as “coon behavior” and his colorist attacks on US actress . Over a picture of Nyong’o he shared in his Instagram Stories, the 38-year-old former professional baller said:

“We can’t come together as a race until the idiots of the race right their wrongs. My name is Gilbert, and I was an idiot for attacking one of our queens for no reason. @Lupita Nyong’ o, I am truly sorry for my coon behavior. #blacklivesmatterdeadandalive #blackexcellence.”

Coon behavior it was ?. He made the comment back in 2017 but NOW apologized. : @shegossipz_

Arena’s sudden change of heart when it comes to Nyong’ o is stunning. He was notoriously known for attacking the Black Panther star’s skin color on social media on two separate occasions back in 2017.

“How black are we talking??? Not to be funny, can u name a beautiful black women on the outside … not brown skin … like tyrese black … top 50 most beautiful women off [sic] all time … the darkest women they have is (Keshia Knight Pulliam, aka Rudy) (gab)) union) (taral hicks) (Serena Williams).”

When u say African features black then u have (#1 lupita nyong’ o), and she’s cute when the lights are off second is (Ajuma nasenyana) sorry but ewww so the black beautiful women u try to boost up is technically light skinned or brown skinned.”

Arenas followed those head ass comments with more foolishness when he responded to a user calling him out under a photo of Nyong’ o shared on Instagram.

“@no.chill.gil hey looks it’s the black girl you said that looks better in the dar[k],”

Arenas responded, “@wg_bombshell_ everybody saying her(skin) looks beautiful how about her face tho?? Lights off.”

He threw more fuel on the fire, adding:

“Y’all tag me like she got a facelift and she went from a 3 to a 10… nope she’s just a 3 in blue water with some blue blockers on. This is no diff [than] a ugly girl with a fat a–. I’ll still beat just with the lights off, but she is glowing tho.”

#GilbertArenas shares his thoughts on #LupitaNyongo ?#Socialites did he go too far ? Common Ground by Above & Beyond Will Get an Unexpected Remix I Believe I Can Lie: Prosecutors Shoot Down R. Kelly’s Solitary Confinement Claims