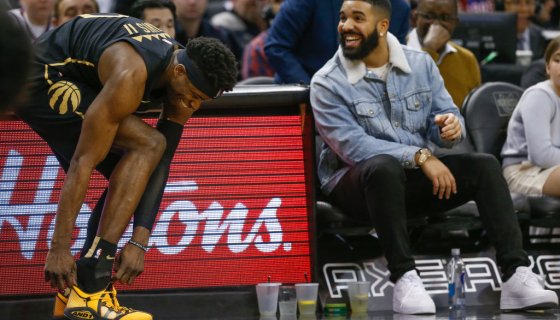 Drake Goes To Barbados To Shoot Some Hoops, Rihanna Still Not Impressed

We know back in his life but going all the way to her home country just to play basketball is ridiculous.

Okay, maybe that wasn’t his true intention but his presence at the Caribbean island caused quite a stir as he and a few of his friends balled out on the basketball court. TMZ is reporting that the 6 God took a private jumbo jet down to Riri’s neck of the woods where he shot some hoops and even posed with some of the fans in attendance once they began clamoring for his love.

Champagne Papi slipped on some Nike gear — sneakers, socks, shorts, jersey, headband — and showed off his sweet jump shot … but as the crowd continued growing, Drake paused the game and donned a face mask while snapping pics with locals.

We’re not sure how sweet his jump shot has gotten ever since he air balled a long distance J back in Kentucky but we’re not out here judging anyone.

Whether or not this will be enough to swoon the Good Girl Gone Bad back into his kingdom remains to be seen (probably not) but at least the good people of Barbados got to see a celebrity put up some bricks on their land like Habitat For Humanity or something. We kid we kid. Fans Rally Around CupcakKe, Blast Insensitive Tweets After She Threatens Suicide On Twitter